TUIState is now TCastleView, methods to change the view are now part of Container, new slick UI when opening the project

We have an important change to one of our most important concepts: states (TUIState descendants) are now called views (and descend from TCastleView).

Oh, and to this we add a new slick UI when opening the project 🙂

This change is 100% backward-compatible. The old code will continue to work, though we advise you to upgrade to new names and container methods/properties.

In total, the upgrade path in typical applications is rather straightforward, although it will require to do a lot of replacements (I recommend to commit everything to your version control before doing the upgrade, and then have a nice diff to audit with state->view upgrade):

This is accompanied by a cool upgrade to our CGE editor UI. It happened because of independent reasons (I did UX testing on a live human at Christmas :), and came back with lots of nice conclusions) but it is nicely connected with the whole views terminology.

Now, when opening any project, you will be greeted with a UI to

This UI emphasizes your most recommended actions after opening the project.

Our documentation, including important chapters about view events and managing views, has been upgraded to new terminology.

Our examples are also fully upgraded now to use view terminology everywhere.

I have followed the upgrading changes but get this error? 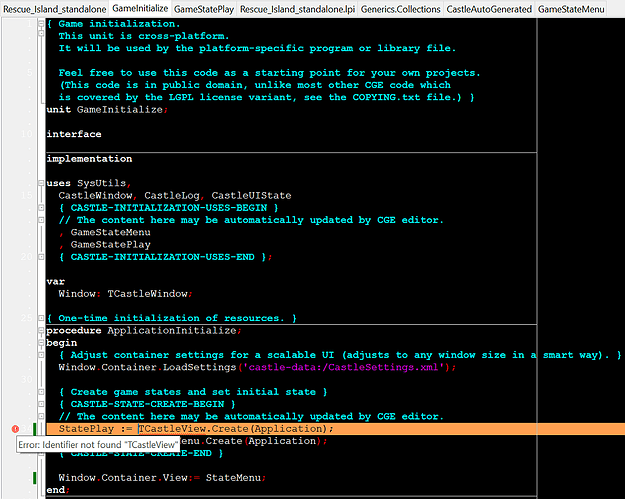 Look at the type of your StatePlay variable (it is in GameStatePlay unit, you can just ctrl + click on it in Lazarus to jump to declaration). It likely has a type TStatePlay, so here you should create StatePlay := TStatePlay.Create... .

I now have StatePlay := TCastleViewPlay.Create(Application) in TStateMenu but now I get an error message I did not have before when using TStatePlay?

Hm, this error message seems unrelated to TUIState → TCastleView rename, and indicates some problem you had before or that you did something weird at conversion. I’m afraid I cannot tell where’s the problem looking at the screenshot.

Please submit a testcase to reproduce the problem, preferably a small testcase.

If you have a version control (as I recommended in TUIState is now TCastleView, methods to change the view are now part of Container, new slick UI when opening the project – Castle Game Engine as I recommend in general – use version control) then please look at your changes, and see whether they make sense, if you didn’t touch anything unusual.