Hello!
For orientation in game world i use minimap. In Lazarus i create it in 2 steps: download all .bmp/.png files into TBitmap variables, and use Canvas to draw map cells around player location. I can make really big map, but draw only then cells, what player can see. I want to carry this in CGE.
I saw isometric_game example code, but don’t understand, how images download to game before drawing. And i little confused by many types in 2D manual

Can i download all files in Pascal code and draw it into Viewport item Plane like texture? I think its easyest and faster method at first development steps.

How it looked in Lazarus: 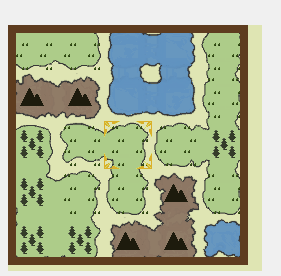 but don’t understand, how images download to game before drawing

There’s a way to significantly optimize this (using batched rendering - up to 100x drawing speed) and make much more “beautiful” (by creating a specific derivative of TCastleUserInterface for rendering the map or minimap), but let’s do one step at a time

To add to what @eugeneloza writes, the manual page about using images is Images | Manual | Castle Game Engine (I have just improved that page, to incorporate some advises from this and Eugene’s post).

Indeed we have too many types related to images (with time I hope to hide/unify some of the existing practically-internal types).

But the recommendation on that page hopefully helps

The 3 images types (and drawing methods) that we recommend are:

In your case, using TDrawableImage (AD 3) is indeed the most straightforward path to convert your code to CGE.

Depending on what you will need later, I would recommend trying out option AD 2 too (TCastleImageTransform). If you think of later adding there animations, physics, also designing it using CGE editor – then TCastleImageTransform is a more powerful option for the future.

Thanks, i try both variants. Really, i want to get smooth scrolling and rotation of minimap.

Seems interesting. Right now I’m using a text file with a matrix of cell information to build the game world. This is convenient, because in percpective it will allow to edit a set of cell parameters - nested objects, images, names. I want to assign to each cell many events, like in strategy game Eador, and personal screen like town view in HoMM… But it’s another story, i thunk.
Thanks for help

Good day!
How can i get access to ViewPort from code? I can do it for analogy with TCastleLabel with FPS?
I try to add my ViewPort in private of main game state window, but it doesen’t work.
My target is to add and delete child images in TCastleImageTransform to next work with a camera.
I am in the wrong way?
And can i use downlodable from code image in Viewport, if it doesen’t pre-loaded in *.castle-user-interface?

First of all, while writing the answer to this, I realized I want to have a CGE example that shows this properly

And I actually already planned to make such example. Recently I moved the old isometric_game (using TDrawableImage drawing) to examples/deprecated_to_upgrade/isometric_game/. Today I have implemented a new examples/isometric_game project that shows how to trivially generate a random terrain by adding TCastleTransformImage instances to TCastleViewport.

I have just committed this, it is in examples/isometric_game/ . You can get it by downloading CGE from GitHub, GitHub - castle-engine/castle-engine: Cross-platform (desktop, mobile, console) 3D and 2D game engine supporting many asset formats (glTF, X3D, Spine...) and using modern Object Pascal . 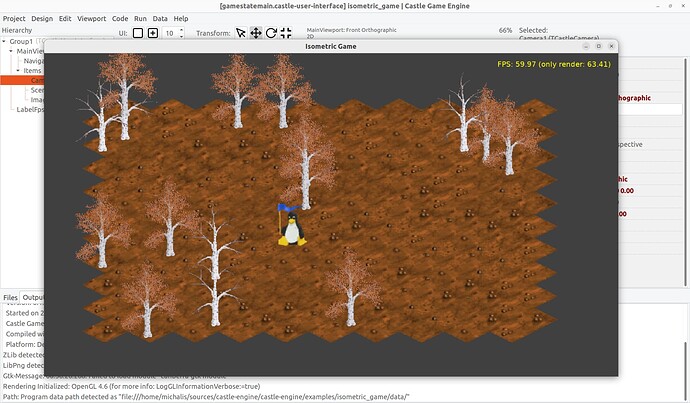 To answer your questions:

The TCastleLabel, TCastleViewport, TCastleImageTransform and all other components you see in the editor are also regular Pascal classes. So yes, you can access them all from code in the same way:

And can i use downlodable from code image in Viewport, if it doesen’t pre-loaded in *.castle-user-interface?

Thanks, this example look very useful for me, will study it.

Good day!
Thanks again, now minimap works nice, as i want.
But, when i tried to move map code to another Unit as procedure, i get problem with FreeAtStop:

(Lazarus says: you don’t declared this)
Is i need some TComponent to use it?

Yes, FreeAtStop is provided by TUiState class (where “Stop” makes sense), and therefore is available in its methods. FreeAtStop is a protected function, so to use it outside you’ll need to either pass it to some child entity, e.g.:

or you should assign a different owner, e.g.:

Or in the end you can “manually” manage freeing of MapTiles, this is comfortable sometimes, e.g. if you want to “load them once” and forget. You can do it either by:

where the corresponding MapTiles[TileNum] will get freed when the application quits or completely manually:

But in this situation you are “in danger” of forgetting to free the class and get a memory leak. It’s nothing too bad (modern systems will eventually free all the allocated memory anyway), but it’s a bad programming habit + memory leaks often point at breaches in program logic and such “additional” memory leaks will make debugging those meaningful ones much harder.

I think, i started understand, thanks

Hello!
I have new question about TCastleImageTransform.
In this example

we move images with this code:

But here TCastleImageControl class be used. Can you suggest a similar method for TCastleImageTransform, please?

TCastleImageTransform is a descendant of TCastleTransform and as such has a Translation property. You can set it to move the object.

Translations work in 2D the same as in 3D (X goes to right, Y goes up, in standard 2D view).

@Noscow Please create new threads for new questions, avoid attaching them to the existing threads. New questions usually imply answers and discussion that are not related to the original thread, so it is better to keep them in separate threads. This helps people answering and people who may visit this forum in the future.

Note: In latest Castle Game Engine, this is more consistent: TCastleUserInterface also has a Translation property (it is a 2D vector). I never liked that weird name AnchorDelta :), it is now only a deprecated alias for Translation.

So TCastleUserInterface.Translation (2D) and TCastleTransform.Translation (3D) are easier to remember. The manual Designing user interface and handling events (press, update) within the state | Manual | Castle Game Engine has been updated.