Easy shadows (in editor, at design-time, too) by shadow volumes (and shadow maps are coming as well)

You can now activate shadows by shadow volumes by toggling a trivial boolean property Shadows at the light source to true! This works (also) in editor at design-time.

This makes the shadow volumes we have documented here easily available, finally. No more messing around with X3D lights nodes.

A simple demo is in examples/viewport_and_scenes/shadows.

We also publish TCastleTransform.CastShadows property to control if some object casts shadows.

This is just the beginning of “really easy shadows”. I enjoy how simple API we have (just a checkbox really!) and how great it is to play with shadows in the editor. But we can improve the functionality underneath now 🙂

Easy shadows looks very good. When will this be available?

It is available already!

Most things we announce are available immediately, unless I specifically write they are only on some branch/PR. Just head over to our downloads on Download | Castle Game Engine , they point now to “7.0-alpha.snapshot” version (already newer than “7.0-alpha.2”). This “snapshot” version is automatically updated whenever the “master” branch changes, after it passes a lot of automatic tests (it takes ~6h to make sure it compiles and all tests pass everywhere).

It already contains working shadows, including the examples/viewport_and_scenes/shadows .

You can always take a look at Release Latest release of Castle Game Engine (Auto-Updated Snapshot) · castle-engine/castle-engine · GitHub to see when were the last snapshot files updated (now it says “3 hours ago”) and what commit is there (now it is Add zero vectors to initialize tex coords in TCastleImageTransform · castle-engine/[email protected] · GitHub , the very last commit I did yesterday to “master”).

I see this method effects self-shadowing, as well. Lovely!

If you can increase this to 2 lights, it would allow for more impactful effects, because your user could use one for, say, the sun, and the second reserved for special effects like explosions or car headlights. You definitely want things like explosions and headlights to cast shadows because they look very weird without it.

If you could make this a dynamic thing per object, such as determined by the most intense lightsource nearby, or to multiply the amount of shadows per object based on relevant lightsources, it would make it possible for scenes like large medieval war-camps with lamps and firepits to have rich cast-shadow effects all around that move appropriately with the characters.

But this is an exciting start! Keep up the awesome work, CGE is becoming more impressive with everything you do! 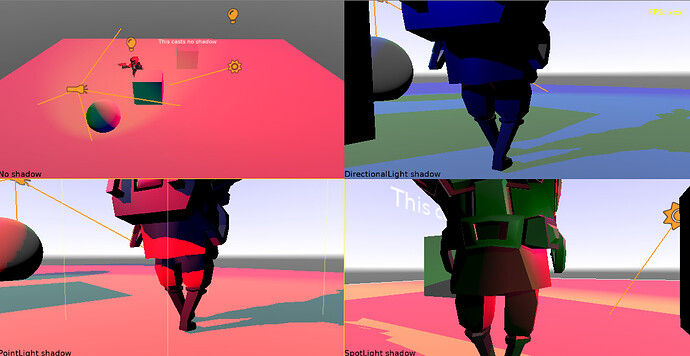 Thank you for the good words, glad you like it!

As for incoming improvements to shadows:

I tried the shadow with my characters (GLTF). It doesn’t work. The characters are in a correct shape (2-manifold), but I used more then one material in blender to set the colors.
After rebuilding to one material with image and uv-editing it works.
Is this behaviour correct? Is the limit only one material?

I tried the shadow with my characters (GLTF). It doesn’t work. The characters are in a correct shape (2-manifold), but I used more then one material in blender to set the colors.
After rebuilding to one material with image and uv-editing it works.
Is this behaviour correct? Is the limit only one material?

So, it would be more precise to say there “each glTF primitive (which is a subset of Blender mesh, limited to a single material)” must be 2-manifold.

It is possible to counter this limitation in the future. We could consider, for shadow volumes, larger units – and then only such “larger unit” (like whole Blender object) would need to be 2-manifold.