How can cge be faster?

Note: It’s not too effective comparing FPS for values above monitor’s refresh rate. Most drivers are capped at 60FPS (like Mesa) and everything above that is “fake”, and actually “harmful” - it means CPU is (over)loaded with work that doesn’t result in any useful outcome.

I.e. to have a more proper test you most likely would want to have a very heavy Tiled map that would render at 30 FPS in ZenGl.

Now specifically about Tiled maps - I myself haven’t used those but looking at castle-engine/castletiledmap_control.inc at 599eaf9b6d6738ee474bf98eca95c1fa17cb162c · castle-engine/castle-engine · GitHub I see that it doesn’t use “batched render” feature which can speed up the rendering significantly. It’s not absolutely trivial to implement it but I don’t think it’s too hard (unless I’m missing some crucial part of Tiled implementation).

I think that simply no one has hit a performance issue with TiledMapControl so far, so nobody looked into the issue. So, if you need to improve the performance of the component (not just for comparison, but for a real usecase) you could have a look at it yourself (as I’ve mentioned, at the first glance it’s rather easy [but will potentially need a decent amount of work and require understanding internal Tiled structure and the way it’s handled in CGE], I’ll explain how if you’re interested in taking this task) - I’m sure such pull request will be more than welcome, or create a ticket at GitHub and someone will look at it (but obviously this might take much longer :)).

Because CGE is too huge, I don’t know how to adjust to speed up the 2D rendering speed. Can I give a look at the direction?

What you need is to use “batched” rendering.

E.g. you can have a look at how I implemented it here: code/batchedmap.pas · master · EugeneLoza / Kryftolike · GitLab to render absolutely enormous maps.

Note that the problem is that in order for that to work it needs to have “all map tiles” in a single texture which could be impossible for a Tiled map in a straightforward way and will require additional workarounds (sorting tiles by the texture they use, which in some complex cases may slow down performance instead of speeding it up).

There is a way to speed up the renderer even further, however it’ll require manually implementing map as a set of TShapes which is not trivial. Roughly it means doing this: https://gitlab.com/EugeneLoza/CastleCraft/-/blob/master/castlecraft.lpr#L114 just in a 2D case. The problem is that when you call the batched version of TDrawableImage.Draw it reallocates some memory every frame. It’s negligible for “small maps” but can quickly become a bottleneck if the amount of tiles goes over 10-20 thousands.

I’m not familiar with ZenGL or implementation of csprite2d. Maybe they’re using dynamic batching for sprites - like CGE does for sprites - but not TDrawableImage, it’s a rather low-level feature that you should use if you know what you’re doing, not that it can’t be improved, but if you go low-level you go there to optimize things yourself. This way if you try my solution above, you should get the same/similar speed. But again, don’t compare FPS above 60. 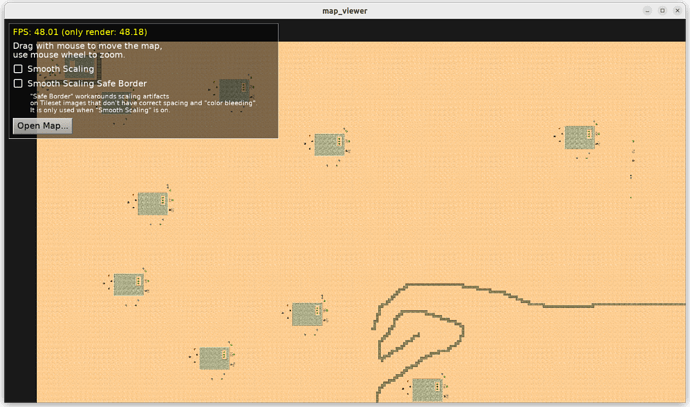 Most framework stops updating, or the update is very slow. But Only CGE is actively developing.

There are many layers of maps,floor wall obj etc. Each layer consists of many tile

The problem is that I just painted a layer of map（floor layer），There are also multiple layers of maps to draw, and role animation，If everything is render, FPS will be very reduced.

So I think CGE rendering 2D is too slow

As for how to test it:

As for the rest of your measurements, we need to have a good testcase so that we’re all talking about the same thing

If you have any particular map where you’re testing CGE / ZenGL / Afterwarp and can share it, it will be much appreciated. And remember

I would also like to see the report how we detect your GPU, in case CGE decided to use some “safe but unoptimal” route because of something. To get this, you can use “Help → System Information” from CGE (open any project to see the menu) and then “Save To File” to get the report.

So, for further optimization, it would be best if you can submit us how exactly are you testing – if you have any project and/or map you can share, this would be best, to make sure we talk about the same thing and we can test it too and say where’s the issue (and possibly improve it in CGE). If you cannot share it publicly but can share it privately, that is also an option, you can send it e.g. by email to me ([email protected]).

I look forward to the performance adjustment of the new version. CGE’s biggest advantage is that the author is working hard to update.

I want to wait for the new version to rewrite the performance example to send it to you, it takes some time.

I hope CGE’s rendering speed is the same as ZenGL

I found two demo , which can explain this rendering performance problem

1、isometric_game
It had 120 FPS on my system

I found BatchingBegin at ExeFile, but I don’t know how to add this

2、deprecated_to_upgrade\isometric_game
This demo draws more tiles.
It had 600 FPS on my system.

isometric_game is just a very simple example. I think 2000+FPS is normal. After I add map complexity, various animations, various UI, it can maintain more than 60 frames. If it have 120FPS now, after I add more， it will fall to about 10 frames.

So in the meantime, specifically for map rendering, using 2D TCastleTiledMapControl is a more efficient solution (albeit limited only to the simple case of 2D map). We have a manual page also How to render 2D games with images and sprites | Manual | Castle Game Engine that describes 2 approaches for 2D rendering we feature now. There is even a possibility to combine them (like render transparent TCastleViewport over TCastleTiledMapControl).

So to be clear, I know exactly what to do to speedup examples/isometric_game, and it will actually help a lot of other use-cases (not only 2D games with map). But it will take time, which is why in the meantime we advise some alternative approaches.

As for your time measurements, as we mentioned, comparing FPS above 60 is not very useful, and it is better to talk about a precise test-case than speculating. You do tests and measurements, but we should make sure that we test the same thing and that we know your use-case. Then we can advise best how to achieve it, in efficient way, using current CGE, before we implement planned optimizations in AD 2.

So, please send us your testcases

Note that CGE downloads on Download | Castle Game Engine now contain the latest optimizations. It took Jenkins a while, due to unrelated troubles

Thank you very much for michalis’s guidance. I generally understand. The demo was probably written by me half a year ago, it can’t compile now after i update CGE.I will rewrite a demo, add various complex situations. In fact, half a year ago I gave up to use CGE after I found that the efficiency was too low. I know how to improve now.It takes some time, I will finish this demo.

Note that I’m working on many renderer improvements and cleanups in a CGE branch Commits · castle-engine/castle-engine · GitHub since ~2 weeks. I just added to the features included there 1 code refactor that gets us closer to implementing “batching across many TCastleScene / TCastleImageTransform instances”, Big rearrangement of RenderBegin/RenderEnd code, to do it only once · castle-engine/[email protected] · GitHub . So I am really working on making TCastleScene / TCastleImageTransform usage (thus example examples/isometric_game) more optimal

Add BatchingBegin…BatchingEnd is the key. This will make CGE a huge performance improvement