In short: How could / should I access the triangulation of a TAbstractGeometryNode?

I’m in the early stages of planning my (as much as possible) cross platform game, and getting used to Lazarus having come from older versions of Delphi. I do have a background in real time machinery control systems, and not games programming. But I believe much of my experience will be applicable / transferable. I’m developing in Windows 10, using the latest version of Lazarus. I have started exploring Castle Game Engine (about a week ago), compiled the Castle_Base package, and run a few demo programs.

I have looked at the Castle editor which looks all good, and I have used it to view demo’s, but I don’t think it will be applicable for the game I have in mind as this will not be based on imported assets and level designs etc.

Here is some background on what I want to do:

In what I plan to develop for my game, I want the player to be able to edit / modify the world by using simplified 3D editing tools built into the game. The world will be an underground environment and will store the data in a simple axis aligned cubic grid, with the cells representing 10 metre spatial divisions. The cells will connect to each other where their contents allow a route through free space. In a way this is a simplified version of the old portal rendering systems, but is not portal rendering per se.

From what I have seen so far in the engine, each of my world “cells” would encapsulate a (at least one) TCastleScene object (except if the cell represents empty space). Where cells connect, any contained graphics that straddles the boundary will be contained in two separate TCastleScene objects, but will coincide at the boundary seamlessly. The “cells” in the world can go in and out of scope depending on whether they have a chance of being visible or not. This is just a very simple scheme not based on exact visibility, but simple criteria like distance from the viewpoint etc. Cells that go out of scope will have their TCastleScene removed from the viewport but will not necessarily be freed if memory is not an issue. This would allow in memory TCasleScene’s to be re-added to the viewport quickly if the cell comes back into scope. Where cells come into scope that are not currently in memory then these would need to be loaded from files on the local computer. This might result in needing to free some least recently used cells so that memory and graphics resources are released.

Each cell will have a hash code. This code can be checked against a corresponding code from a server to see if the local copy is dirty, and if so re-load a new cell from the server. When a player modifies the graphics in a cell that they “own”, then when they commit the changes these will be up-loaded to the server. The server will then inform any other players which have that cell in their scope so they can download the changes. All of which will happen transparently.

My understanding is that the TCastleScene root node contains an X3D node graph representing the actual geometry and materials etc.

Now for my actual question :

I want the player to be able to edit the “world”. One of the editing abilities I want is to be able to perform something similar to CSG operations. Say for example the player want to make a tunnel through a solid piece of “ground”,. They would draw a 2D section cut of the tunnel and then extrude this through the ground. Behind the scenes the system will need to “subtract” the tunnel from the ground graphics. This will require finding the intersection of those graphics and deleting everything that would have appeared inside the tunnel.

For this I imagine a method call that takes as parameters a pair of TAbstractGeometryNodes and returns a TIndexedFaceSetNode
which is the result of subtracting the first parameter from the second parameter. This would involve something like intersecting all of the triangles in the two sets of geometry to produce new vertices and edges at the intersect. New faces will need to be generated , and vertices and edges inside the tunnel deleted.

I already know how to intersect pairs of arbitrary triangles in 3D space and compute the line segment intersect in terms of the maths. But what I don’t know is how to access a list of triangles from a TAbstractGeometryNode. I have seen methods that are to do with how an X3D node is triangulated for internal use, and that “OverTriangulation” can be used in order to produce better shading.

But how can I access the triangulation which is already performed by the engine? It would seem better to do this than to re-triangulate myself…

Thank you very much for the good words!

What you describe makes sense, although I would say:

To access the triangulation result: The answer depends a bit on how general you need your solution to be, which is – do you want to handle absolutely all geometries or not.

As for OverTriangulate – I would not care about it much. It’s a technique that increases generated mesh density for some primitives like Box, Cone, Cylinder. It doesn’t affect “explicit” meshes provided as a set of triangles or polygons. And the better shading matters only for Gouraud shading. In most cases, you’ll be fine using OverTriangulate = false always.

Your comments on starting with something simpler are much appreciated - I understand very well where you are coming from. I do realise that I am apparently just the latest in a very long line of developers with somewhat unrealistic dreams - and that is something I do need to keep in check, but at the same time not get defeated by other peoples viewpoints.

I would run the project more or less in the way you describe anyway. I do not plan to start this as a project with an immediate end goal of producing an MMORPG. I just plan to start it and continue in a way that does not defeat that as an end goal. My initial testable systems wouldn’t even have networking built in - as you suggest, just testing and refining the “cells” system first, for example, but keeping in mind that it will be networked from the beginning. So, e.g. trying to develop game mechanics from the beginning that make it scalable and as immune as possible to network latency and unreliability etc.

Actually, I’m not even intending to create a “finished” game. The idea is more that it would be a sandbox environment which integrates everything in one so that “players” can unleash their creativity, and effectively create their own games within the “game” in one seamless world. It will use intuitive / easy to use 3D editing integrated in (much like how Sketchup is easy to use, but less featured than that), and my own “Pascal like” server side scripting language to create active content.

I’m thinking of what I write as more of a “bootstrap” process which eventually results in a game. When this reaches a useable initial level I will recruit as many close friends as possible to “play” it, producing the first content. At the same time refining the system in response, simulating as much load on the system as possible to test the scalability, and basically letting it grow before releasing it properly into the wild.

Thank you for your advice on using the editor and I will look more deeply into that. As you say, there will be user interface elements on top of this which may be applicable here. I will also look into .castle-transform files as a basis for serialising and storage of the cells which sounds like a good idea.

From your options on accessing the triangulation, the CastleInternalGeometryArrays unit immediately sounds attractive and I will look into that first.

Please do, if you would, continue with any observations / criticisms etc of what I say. It will all help to remain in the real world and avoid pitfalls going forward.

Thank you very much, Michalis

Ok, so I’m thinking that TCastleScenes’s can be triangulated along the lines of this. This iterates over a TCastleScene for OperandA which produces TShapes. The TShapes are iterated over which produces triangles. OperandB then needs to be searched for triangles that have a chance of intersecting a given triangle:

Does that make sense?

If this is along the right lines in the engine, then there are a couple more facilities needed from the engine:

Yeah, the outline of the algorithm makes sense.

I would pay special attention to the statement you made:

Where triangles have intersections, they will need to be truncated, each creating a quad and a triangle.

In general, difficult cases may happen, as one triangle may cut the other triangle only partially. You have 3 cases: 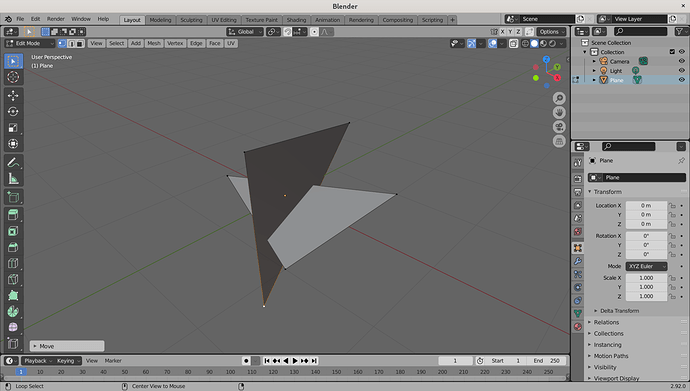 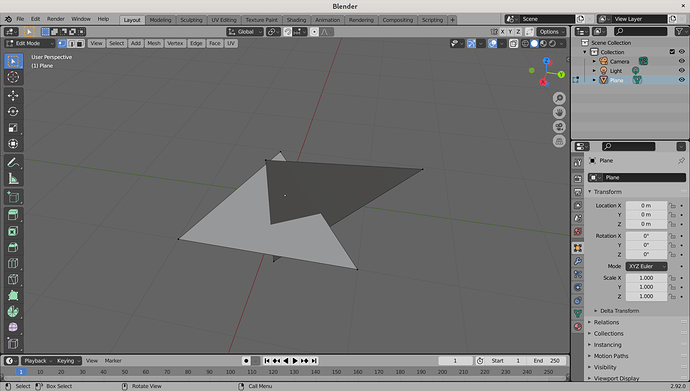 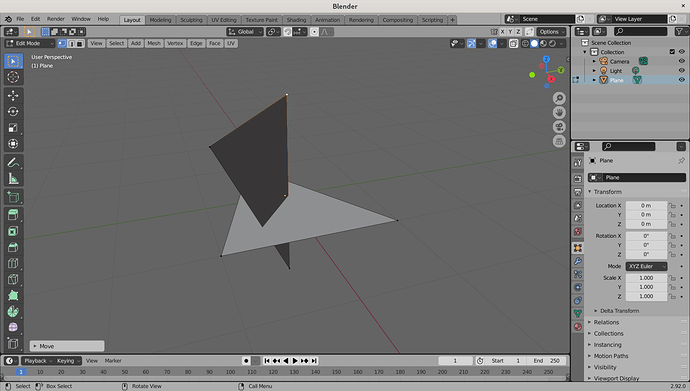 Case 3 is just like case 1, but with different order of operands.

In all cases, splitting triangle A into new triangle (NewAT) + new quad (NewAQ) makes sense as a first step… But in case of 2 and 3, this is not yet the end of wok – you will have to connect the cut with more incoming cuts. You can detect them as “more triangles from scene B cut triangle A”, but applying them creates more interesting shapes, and assumption “triangle A is split into NewAT + NewAQ” seems to fail. If you need a general CSG solution, you need to account that the “cuts” draw any polygonal chain (connected line segments) on the surface of A. That is, imagine you have: 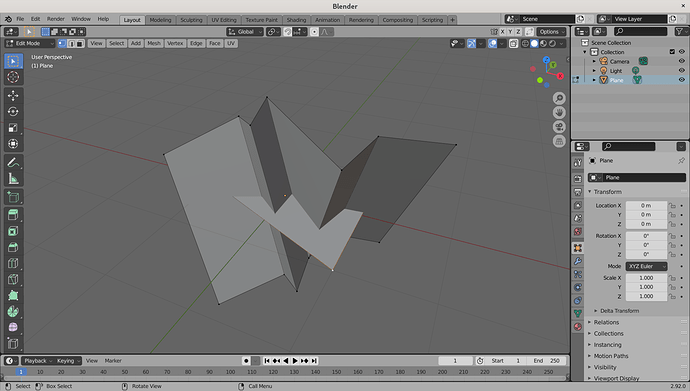 So you need to

To make things more complicated, you will want to track the same thing at B.

Depending on the details, starting iteration from A or B may be more efficient. Once you have the algorithm correct, I would look into that. In case of a symmetric operation like union or intersection, it may be beneficial to swap the operands, to easily gain speed.

So, these are my thoughts

Disclaimer: I have never implemented a general CSG mesh<->mesh operation myself (in CGE or otherwise). So these thoughts are just “what I would watch for, how I would approach this if I would implement this myself”. But I did not research how others do CSG, and whether my above description corresponds to what others are doing. It is possible I overlooked some critical problem or critical solution in this

I see you made separate forum threads about the 2 questions at the end (that is indeed helpful, thank you) so I’ll answer there.