Moving in 8 directions on basis of degrees?

Hi.
I want to move a Scene in 8 directions.
Idea is:

The “chance” of Player.Destination.Y exactly to be PlayerTransform.Translation.Y to make it GoRight is almost none, so I was thinking of using grade-ranges between the selection of directions, with an angle from the center of the Scene image.
But I am rather bad a Geometry.
Ofcourse with every TState update in steps I could make it move to the destination translation, but it has to play the right animation also (I have Playanimations for every direction).

Hope you can help me with this! 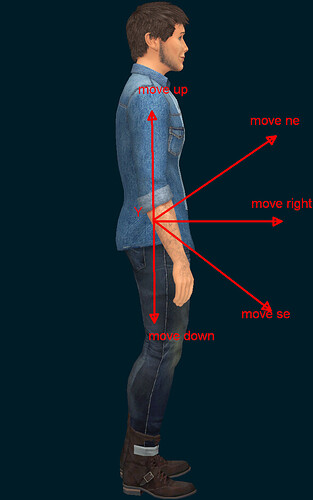 The “chance” of Player.Destination.Y exactly to be PlayerTransform.Translation.Y to make it GoRight is almost none

That highly depends on what exactly is needed from the translation:

Thanks.
What var has to be PlayerMoveAngle? I have now made it a single.

I get 2 errors though:

What var has to be PlayerMoveAngle

Yes, it should be Single or Double.

I get 2 errors though

Yeah, I’ve forgotten “of” in “case” syntax. Sorry thinking C# at the moment

But I am still getting the “Illegal expression” error?

ArcTan2 is a single and Translation.X a float. Maybe this?

But I am still getting the “Illegal expression” error?

Ah, I see it’s on a line above. I thought it was pointing to “Case”.

Ok.
I clicked around the character image but only when I click right of it, one of the direction animations and movements is played. Mostly the “move right” and sometimes the “move ne” if I click slightly higher.
And re-clicking won’t change the direction when it’s already moving.
What could be wrong?
Maybe put a label text to display the angles to see if it needs ‘tuned’ or so?

I just tried your first example and it works okay, though I get an error with the Epsilon (not found, does it need another uses file? I already have ‘math’.
For now I replaced it with 100.

But when I try this to expand with GoBack and GoFront things get complicated.
`

The Y interferes with the first lines so move is always GoBack instead of GoNW or GoNE.

And re-clicking won’t change the direction when it’s already moving.

I’m not sure how it’s implemented in your code. But you should re-run the “move to” algorithm every time you click (and make sure it makes sense - can properly restart the animation, etc.)

Maybe put a label text to display the angles to see if it needs ‘tuned’ or so?

It’s always a very good idea to have some debug information. Often just dumping it into console is enough (not as convenient on Windows, where console immediately closes). By default CastleLog can also write the debug information into a file - but it’s not a good realtime data then.

though I get an error with the Epsilon

Yes, Epsilon is a variable that would describe how close should the difference between Ys be to be considered negligible (aka floating point calculus accuracy). However, note there, that I’m not sure if it would make sense for larger values. It was supposed to be something like 1e-4

Overall, I’d still advice you better to stick with angles. In the code above you get the logic a bit wrong and thus it may will fail in some situations. Consider this (it’s a pseudocode, don’t expect it would work if copypasted;) - just demonstration of the logic):

The core problem here is that all the cases are mutually-exclusive. I.e. if you go Up you don’t check Up-Left and Up-Right.

And yes, this code is complicated, so unless there is a good reason to, I’d better stick with angles myself - those should be much more universal and in the end may turn out easier to debug in case something goes wrong.

Ok, so using angles is better.

But I can’t find out why it does not work.
I remembered user Valterb used degrees once; see: 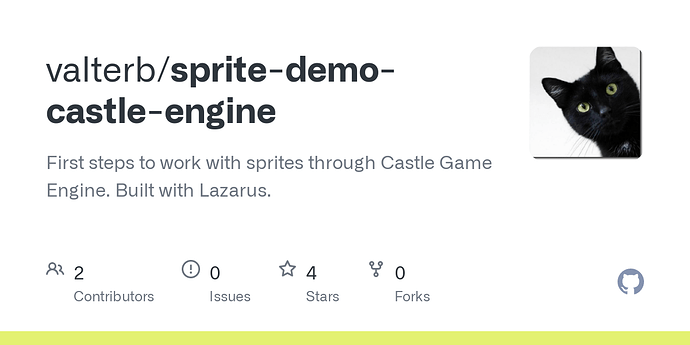 First steps to work with sprites through Castle Game Engine. Built with Lazarus.

I tried to use this but got an error on uses file SpinEx;

So this is a uses file from Lazarus, not Castle Game Engine. How can I add this use or is the same function it uses in CGE, maybe in the ‘math’ use?

Update: Succeeded in adding SpinEx uses file but it needs another uses 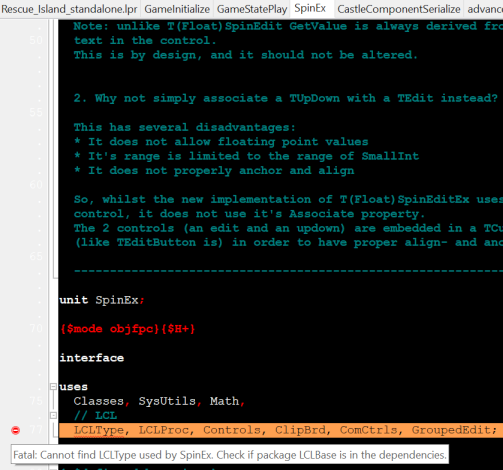 I don’t want to use SpinEx as it is too much dependent on Lazarus and other uses and packages.
So if there is a CGE alternative it would be great.

For now I have made this; it works okay but is somewhat rough and not 100% reliable, so working with degrees would be better but I find it too difficult. maybe you can view from this code how it should look like with degrees.

I experimented with some values after passing them to labeltext, to see what they were doing.
The values did not match what was in the case, except 0. and there some negative values also.
And why PlayerMoveAngle had to be 8, it even increases the negative values.

I now have this and it works, though I don’t understand why clicking around the Transform gives this strange values:

But at least it works!

And why PlayerMoveAngle had to be 8, it even increases the negative values.

Ah, obviously I’ve forgotten to divide it by Pi and shift by another Pi to get 0…1 angle. Should be (again not tested):

Sorry, this still does not work; the outcome is always 0, so there is something not right with the formula.

Now to stop character walking when it reaches destination I have made this.
When it reaches first X or Y it also changes direction and stops if both X and Y are exceeded.
It works fine, though I am interested in other approaches that may be better coded.

And last 2 lines are somewhat obsolete as I noticed Y destination is always reached first.

so there is something not right with the formula

C’mon, it’s working for me

It shouldn’t be wrong in the core - it may be rotated by any multiplicant of 90 degrees, but not completely wrong unless we’re feeding it wrong data

This will work only when Player.Destination.Y is initially less than Player.Y. I’m not sure what exactly you want to achieve, but I’d try doing this way:

I uploaded the problem.
Maybe you can take a look at it. I put my own PlayerMoveAngle code (that works, but not great; moving NE does not work now) between brackets.

Hi Carring,
I don’t know if you have already solved it but in the demo you are referring to there is everything you need.
Even if it was written under Lazarus the algorithm is still valid.
Ironically, you could have 360 animations, one for each degree.
Just pass the algorithm into your code and ignore everything else.
The piece of code you need can be found in the CastleControl1Press procedure (look at my comments). Once you have obtained the “Degree” value with about thirty lines of code you can assign your animations (4, 8, 16 and more directions).
If you need any clarification regarding my demo please ask.

Thanks for your reply.
I had tried your code before but got stuck on the required SpinEx uses file.
See my previous posts in this topic.
SpinEx needs other uses such as LCLType that I could not find, so I got stuck on this and was looking for a solution without the need of these extra uses.
So maybe you know another way to get 8 way direction?

SpinEx file is not required by the algorithm, it allows the use of TFloatSpinEditEx which contain values that you could store in variables or in an array. I think you just need the unit Math. I have read the whole thread and as I told you, you have to ignore any references to components on the form.
Let’s take an example:
You click somewhere to move your character.
You need to get the angle between the character’s (x, y) coordinate and the mouse’s (x, y) coordinate.
When you have the angle you have to compare it with your array where you have stored 16 values, i.e. UP from 337.5 to 22.5, UPRIGHT from 22.5 to 67.5, RIGHT from 67.5 to 112.5 and so on for all eight directions. To have all the range values open my application and the values to use are already present in the TFloatSpinEditEx.
If the degree obtained is for example 340 it falls between 337.5 and 22.5 and the animation to be performed will be UP.
There can be several ways to use the algorithm in your code. I would simply make a function to be called after the left click which will return the degree to me. So I see which range it falls into and I run the relative animation. Or you can do it all within a procedure as well as in my demo.

In this example the range values are written directly but as mentioned you can store them in an array.
Keep in mind that you have to modify it according to CGE’s new sprite handling.
One more thing:
as written in the comment, the ranges are perfect for a top view but you could change them at will for each environment of your game so as to hide as much as possible any oblique walkway typical of sprites.

Many thanks, I finally got it working with this code.
Then I had to adjust some of the degree ranges by trial but that was all.