How do I get the width and height of the texture for TCastleAbstractPrimitive?

How do I get the width and height of the texture for TCastleAbstractPrimitive?
While I’m doing it like this.

It turns out that I load the texture twice. Therefore, my way does not seem right to me.
Is there another way?

There are some “tricks” you could use to access the already loaded texture node:

… but my recommendation would be (for now) to not do these tricks.

Instead follow the approach you show above, create a TImageTextureNode just to read size, this is OK…

So whoever (you or primitive) will load the texture for the 2nd time, in 2nd TImageTextureNode instance, will actually just use the cache, and it will be instant.

I did a quick test, attaching:

In TViewMain.Start I create a new

and set URL, only to know the texture size. I let this TextureNodeOnlyToGetSize to exist (until TViewMain.Stop) so that it keeps the texture in the cache. When the box (TCastleBox) needs to load the texture, it will just use the existing texture from the cache. This can be confirmed by activating log 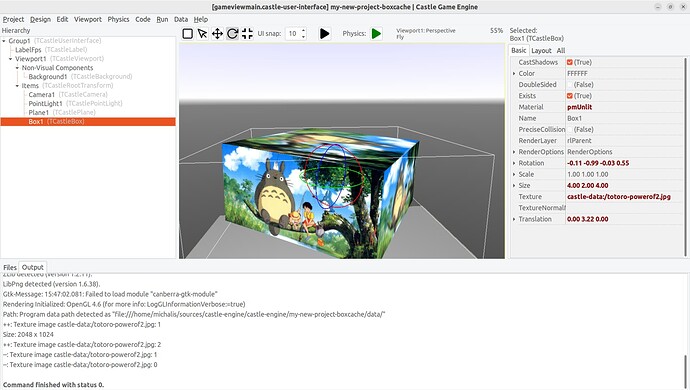 Indeed. The scaling happens right before texture is actually loaded into the GPU, so you cannot (kind of by design) actually see the scaled sizes now anywhere. But you can just invoke ResizeToTextureSize to use the same algorithm as CGE. It has an overloaded version that just takes and returns an integer size, i.e. it doesn’t actually resize any image, just answers what the resulting image “would have”: Castle Game Engine: CastleGLImages ,

So if you have a texture Width and Height, you can do

You can go one step further to support TextureProperties.guiTexture , Texturing component - extensions | Castle Game Engine (I admit I don’t like this name, I should change it to like Mipmaps with inverted meaning – because it has use-case outside of GUI of course too, sometimes you don’t need mipmaps and then you don’t need power of 2). This would look like:

I wrote this (untested) code looking at our current logic in src/scene/castleinternalrenderer_texture.inc .