This is the first release of a simple, GPU-based 3D particle system for Castle Game Engine. You can find it in this github repository.

It also includes a simple particle editor as part of its demos: 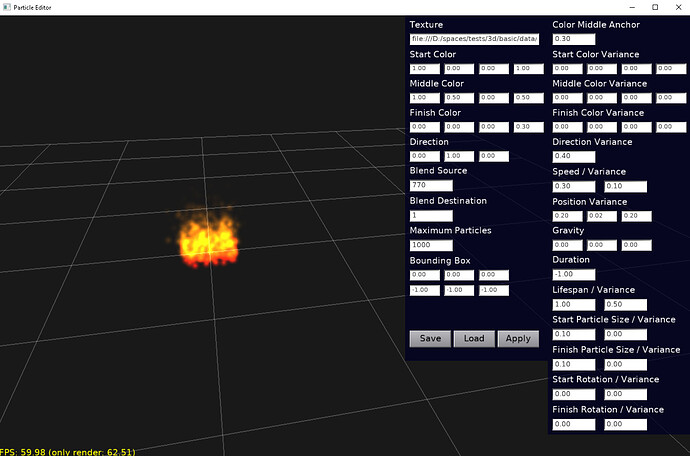 Because emitter is descendant of TCastleSceneCore and uses direct OpenGL calls instead of CGE’s own renderer, there’re a lot of TCastleScene’s functionality and behaviors that are missing at the moment. I’ve spent the last few days to add some of it back:

Edit: I decide to remove ProcessEvents at the moment, mainly for backward compatibility with the old 2D particle system.

Amazing work thank you, this is important feature for engine

Yeah this looks absolutely cool. I have it in TODO to review and

I just add 2 new parameters: Radial and it’s variance. This allows to create swirl effects like dust devil or similar

An example for this effect also added to demos.

@kagamma thousand thanks for this work!

Looking from the point of view of a developer that wants to use this in own projects:

So I would generally focus on:

Thank you for your words!

The main purpose of editor is to serve as one of demos for the library, which I took inspiration from Urho3D’s editor (Urho3D Scene Editor Progress - Game View - YouTube). This editor, which is a full-blown scene editor, is actually one of Urho3D’s demos, written using the engine’s own components, including its UI.

So I prefer it to stay as it is in its current state, of course small QoL changes like color dialog and tooltips will be added soon in the future

Now, the idea of exposing everything to castle-editor and let it does all the heavy work is very interesting. I will certainly look into it in the future

Now, the idea of exposing everything to castle-editor and let it does all the heavy work is very interesting. I will certainly look into it in the future

Great:) I realized it may also need ability to edit non-visual components in CGE editor (as you want to edit the reusable effect settings, and only assign them to the emitter) – this is not yet available but will be:)