Discover what happens when occlusion culling is enabled

With occlusion culling enabled, is there a way to discover if a drawn object was culled or not?

I am aiming to use the engine to display a very large environment which is designed to take advantage of occlusion culling. It is divided logically into cubic cells and the environment is primarily “underground” or enclosed in some form such as caves, caverns, rooms and corridors etc (the graphics are free form, not necessarily following the cubic data structure). The cells have pointers to adjacent cells which are set only if the content allows a view through to that cell.

The aim is to load cells into memory, either from local files or downloading on demand from a server. A cell which currently is not loaded would be drawn simply as a black cube (in a drawing order which takes advantage of occlusion culling). Where an empty cell like this is not culled then it knows it needs to obtain the data (accepting that temporarily a black cell will show on screen for several frames until it is populated, where these cells are far away this will be obscured in fog). Where a cell is culled then whether or not it contains data, it knows that the cell may be unloaded. (if the current drawing rate is sufficient then it may choose not to unload occluded cells). Where a cell is actually drawn, if it has “pointers” to so far unconsidered cells then if the drawing rate allows it will allocate the new cells. If the drawing rate is near slowing then it will deallocate the cells least recently drawn to make room for cells that are likely to be drawn soon.

So, this functionality depends on knowing the result of occlusion culling.

It is not available yet, but it could be easily added. Are you interested in information whether the whole TCastleScene was culled or not, or a particular shape within that scene?

The “cells” I am talking of each use an IndexedFaceSet mesh for the static geometry, so I suppose per-shape data would work. It wouldn’t matter if I received multiple notifications per cell, I could deduplicate them before retrieving cell data.

If implementing both wouldn’t be a problem, I suppose that would be the most flexibility for your engine. I imagine it could be done by assigning an event for whatever is needed. If the “user” is interested in TCastleScenes then they assign an event that listens at that level. And a corresponding event for TShapes.

But as long as the containing TCastleScene can be found from a returned TShape, then all of the available data is exposed anyway, and the receiver just has to decide how they deal with duplicate hits per TCastleScene.

I would be grateful for whichever way you implement it!

Could you do that please?

Committed to GitHub in Implement TCastleScene.WasVisible, TAbstractShapeNode.WasVisible, with · castle-engine/[email protected] · GitHub . You can either wait a few hours until the binary build of CGE is updated, or get CGE source code and recompile it now following Compiling from source | Castle Game Engine . 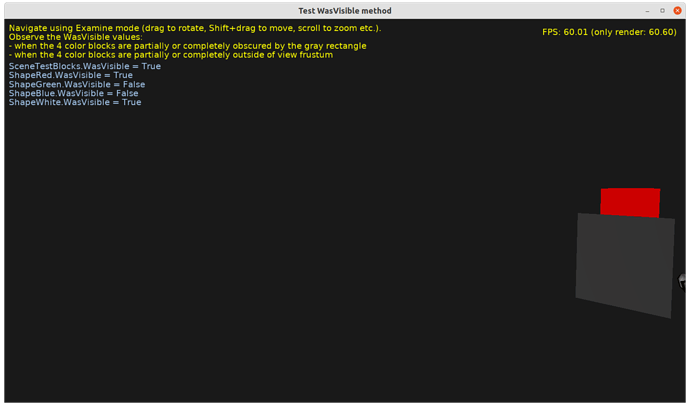 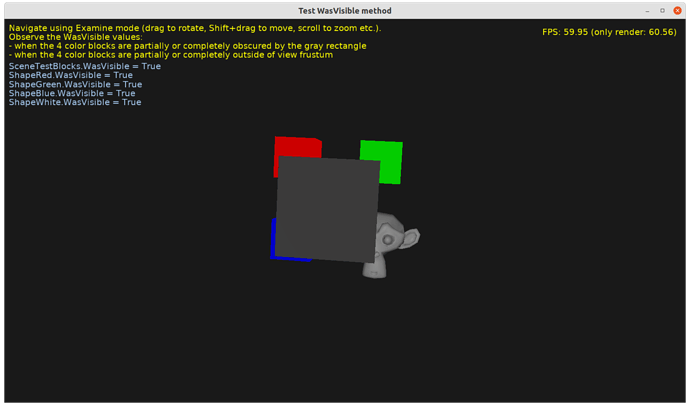 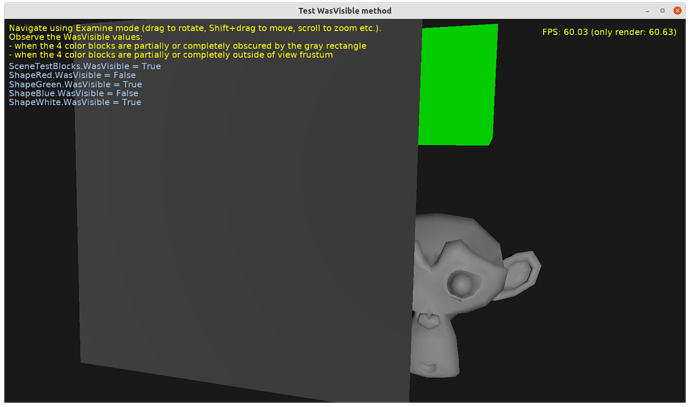 This is the perfect response!

I agree with what you say, it makes absolute sense to delegate the iteration to the user code as this will depend on the “use case”, rather than the engine needlessly iterating on everything.