I want to design a nice looking UI, a sort of HUD, for my project and as I’m using 3D anyway all UI components can start off as being planes (for flat buttons) or rectangular boxes (3d controls).

Here’s my basic plan, I want to create a Scene to hold the UI elements then use BeforeRender to position the scene so it remains fixed relative to the camera (and by association the viewport). I can then detect user interaction with the Key / Mouse / Touch events and respond accordingly.

Two simple questions and then one problem…

I tried out using the following code to test…

I sorta thought this would fail as it’s not taking the camera into account and it does indeed go wrong at certain rotations (I can see why now - everything’s world relative).

I’m obviously using the wrong function - this was just a quick first stab.

So I’m looking for something similar to PositionToWorldPlane that uses the Camera for the calculations.

Where do I get the extent of the ViewPort from?

You can get the current TCastleViewport size looking at

If you just want to know the current aspect ratio, which I suppose is what you want for 3D UI, then both options are fine. EffectiveWidth / EffectiveHeight will be equal to RenderRect.Width / RenderRect.Height.

Make my UI always be drawn? I guess this is like giving it a draw distance of zero.

To make the UI not collide with world geometry,

Note that if you want the GUI to be flat 2D, then you should just use the standard CGE UI ( https://castle-engine.io/manual_2d_user_interface.php ). It’s way simpler than doing it yourself in 3D

But then, if you want to place it in 3D and e.g. rotate with perspective, than indeed you have to make it a 3D object inside TCastleViewport. I plan to allow our “standard UI” work in 3D some day too (I have an idea how to do this), but it’s not yet done.

PositionToWorldPlane does take current camera into account. And it should account for all possible perspective etc. settings. If it doesn’t work, please submit a bug with testcase – it really should work always

Well, I’m not sure if this is a bug or just me being stupid…

The “Not Possible” is from Viewport.PositionToWorldPlane returning false

The project is a simple load object with auto controls + camera with F11 bound to Full Screen. i.e. load it and press the arrow keys to set it rotating

I made some tests.

The PositionToWorldPlane works as documented in my tests, but it may be not what you need. In 3D, the new PositionToCameraPlane may be closer to what you expect

I extended your test, showing the result of PositionToWorldPlane in 3D. Then I changed it to show PositionToCameraPlane (you can comment out two lines in CastleControlBase1BeforeRender to switch back and forth between these 2 routines). Attaching: position_to_plane_test.zip (1.5 MB)

It uses PositionToWorldPlane(CastleControlBase.MousePosition, ...). And visualizes the result by moving a trivial scene that shows a sphere. You can experiment how it works after you rotate the camera a bit.

I also did some more tests and came to the conclusion that I hadn’t explained what I was trying to achieve sufficiently which was, of course, camera-plane relative positioning.

I discovered the word “Frustum” while experimenting and tried writing my findings at which point I discovered that my usually good technical vocabulary was sorely lacking when it came to 3d (highly frustrating).

Essentially I wanted to place a bounding box in front of the camera and then position models inside it.

It sounds like the new method provides the co-ordinates I need to supply to two vector3d values to create a box I can position things in relative to that box.

I wanted to take the 3d line so I could rasterize some SVGs and use them as textures I could place on a plane (model of a…). I went on to write the SVG rasterization stuff but then my test didn’t work because I didn’t have PositionToPlaneInFrontOfCamera (perfect naming IMHO)

As an added bonus camera-relative positioning, hopefully, allows for positioning planes with textures, applied with TImageTextureNode.SetUrl to a TX3DRootNode.DeepCopy of the plane (model of…). ThIs is a very useful technique I watched a video of recently on YouTube frequently used to make advertizing shorts in Blender for franchised movies (Marvel was the example in the video). After GIt’s updated I’ll throw a little test together, it’ll be interesting to see the results.

Just changed the position_to_plane_test.zip to make the new object a cube

How do I back-out the camera’s rotation so that the SceneShowClicks object doesn’t rotate with the main scene, or more accurately can be rotated relative to the camera?

Implementing (1) produced, as expected, the specific case of making the object orthogonal to the camera. I then decided to try rotating the object around the Y axis thinking that Y is up and everything is normalised so no problems (as if anything is ever that simple…)

Everything worked nicely and my cube was merrily rotating independent of the camera view (when rotZ = 0…).

Yep, you’re way ahead of me here… Soon as the Z rotation was non-zero my initial delight was somewhat tempered as the objects rotation became unpredictable - well, to myself it was unpredictable, to you it’ll be predictably ‘my concept of unpredictable’

This independently rotatable object concept may seem like it’s a pointless objective but it’s actually rather cool in specific circumstances.

The best examples I can think of easily are related with generating revenue.

I could have a cube that rotates showing four images (extensible to n-images by altering the texture and other associated data on the plane facing away from the camera once per pi/2 revolutions). These images could then, if clicked on, open a web browser to some defined URI.

One obvious use would be self-sold advertising / sponsorship slots. Unless your project has an identified list of potential advertisers / sponsors (hopefully before you start development) this one’s a hard sell. There is, however, the possibility of cross-promotion either for your own projects or those of other like minded developers.

Another, easier to realise use, would be acknowledgements to third parties. Taking view3dscene as an example (as I ain’t got a product yet) a list of Patreons of some donation level could be displayed with the links all going to a unified ‘Support us and get your name here page’. The Patreon usage example is common with youTubers, you support a channel for X bux PCM and you get a mention in the ending credits.

At least one spot on this virtual cube would, of course, be reserved for the ‘how to get added to the vcube’ (think I’ll make this the top face as it’s never normally seen)

(2) This is in some ways related to the above. I was going to ask you about object hierarchy at some point anyway but the Billboard stuff resulted in me finding the grouping section. As a result I’ve got some reading to do down the like at which point I’ll prob have some Qs about that too (not confused enough to ask intelligent questions on that subject ATM).

Eek… I just ran the trivial test with a cube in FullScreen and noticed something I didn’t spot in Windowed mode. The cube is rotated, something barely visible to me initially, as it’s a near black on black.

While PositionToCameraPlane does exactly what it says I realised that a variant is required for this specific use - PositionToCameraSphere is, I imagine, the desired method. I think that using a Sphere for the projection should have the effect of an object would always be directly facing the camera with no rotation.

This also make me realise that BoundingBox may not describe the volume an object can be rotated to as to have an object always visible the BoundingBox describes as at a rotation of 45 degrees in X, Y and Z the object’s projected 2d representation will be greater than that when rotation is zero.

view3dscene always looks like there’s too much border although having just tried it out on the table model I observe that rotating in Z is accounted for (which is why it looked like there was too much border).

If I’m correct BoundingSphere looks like it’s the closest to the desired method. What’s the easiest way to get that for an object in a Viewport?

There’s no BoundingBoxContainingBoundingSpehereForBoundingBox method I note

Indeed the point of PositionToWorldPlane is to generate positions on a plane parallel to the camera, so the exact distance between the generated position and camera position will differ slightly.

If you want to instead move the object around a sphere aroond the camera, you could use this:

Note that in CGE, TCastleTransform.BoundingBox should always account for the object transformation, including it’s rotation. So this box should always be valid. But it may be larger than necessary in some cases.

Anyway, RotatePointAroundAxisRad fixed my wobbly rotating cube but there’s still an issue as the returned TVector3 is still on a plane rather than rotated perfectly flat to the camera.

Trying to explain something visual in words is always hard so, a bit of code and an image make things far easier to explain and demonstrate what I’m trying (and failing) to do… 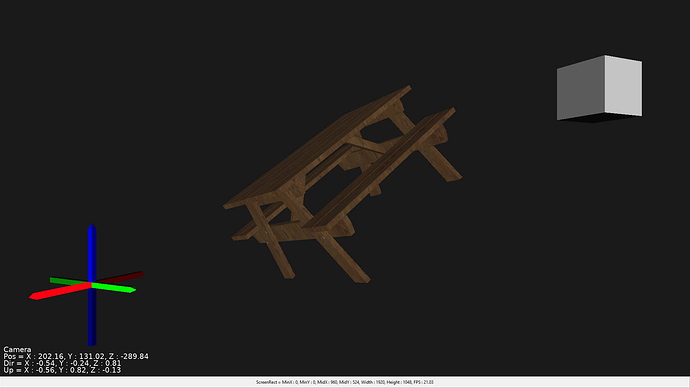 The cross in the lower left is displayed from slightly above while I want to display it so that the blue bar is angled slightly away from the viewpoint to that the red + green bard are orthogonal to the viewpoint.

I found RotationAngleRadBetweenVectors which appeared to be the solution. I’ve tried many combinations of position, direction and up vector from camera and the cross but can’t manage to get it to tilt away as I desire.

If you run the test project I’ve bound the X key to move the cross between lower, center and upper areas of the screen (it cycles, press X multiple times to see). The rotation I want to apply when in any vertical position is the same as displayed when it cross is in the center - essentially tilting the object away from Y.

I’ve also bound the shift and control keys so that…

The cross is colour coded X, Y and Z axis are R, G and B (easy to remember) with the pointy tip being the positive axis (rightward, into, upward)

Oh, yeah. Is there an easy way to change the notification font to a system mono-spaced like courier new? Formatting is suspect in hard-coded Serif…